This page serves as a repository for all materials pertaining to the New York State Pavilion – historical background, laser scanning, and 3D models. Please click one of the headers below. 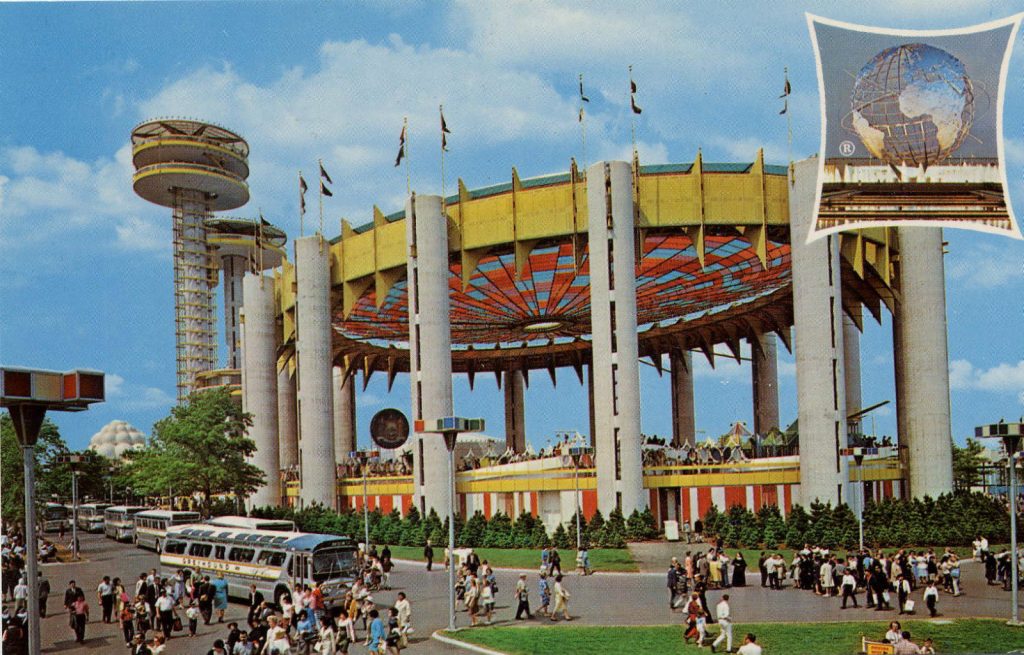 Postcard featuring Pavilion during the Fair 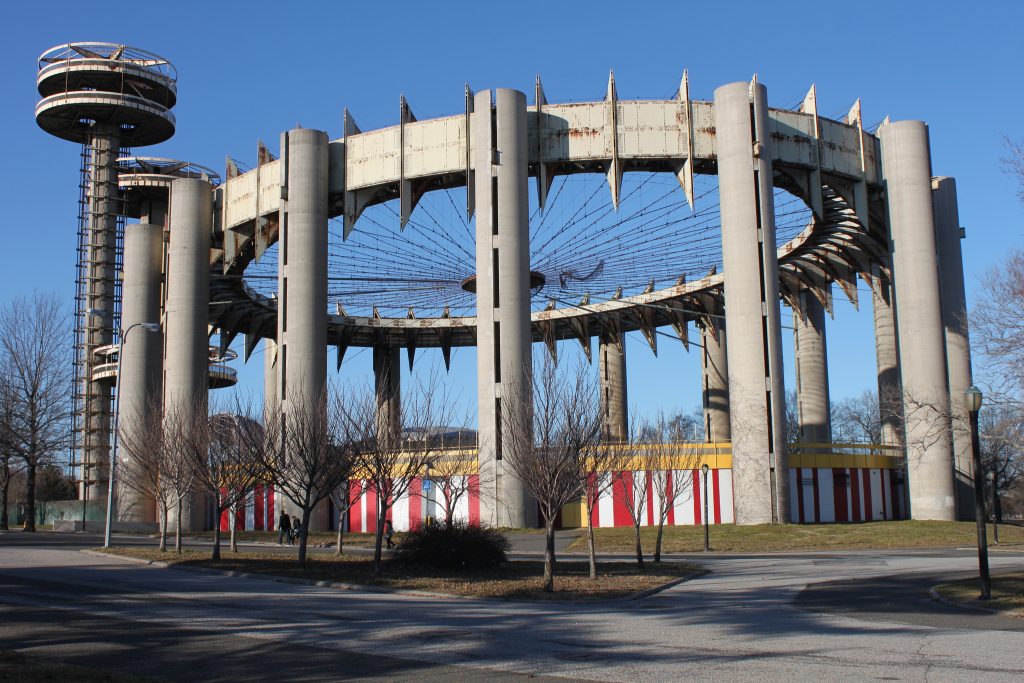 Condition of Pavilion just prior to 2014 UCF scanning project

The Highest Point at the Fair

The New York State Pavilion remains one of only a handful of architectural links to the 1964/65 New York World’s Fair.   Designed by renowned architect Philip Johnson, the Pavilion consisted of three distinct components –Astro-View Towers, Tent of Tomorrow, and the Theaterama.   As the host state to this 646 acres international celebration of the future, the New York State Pavilion was designed to be seen by visitors throughout the expansive Fairgrounds.  The Astro-View Towers’ Sky-Streak elevators whisked Fairgoers 226 feet above the Fair where they could wave to family members below, wonder at the Manhattan skyline and even catch a glimpse of Connecticut.

Sixteen continuously poured concrete columns rose to a height of 100 feet to support the roof of the Tent of Tomorrow. At the time of the Fair, the colorful ceiling of the Tent of Tomorrow was the world’s largest cable suspension roof.  Over 2,000 tons of steel were utilized between the roof’s 48 cables, compression and tension rings.  Costing in excess of $1 million, the terrazzo floor of the Tent of Tomorrow featured a carefully detailed 9,000 square foot road map of New York State.  It was within these impressive confines that the State of New York showcased many of its natural and cultural wonders to visitors.  The final structural component of Pavilion was Theaterama with an 80-foot diameter – 20-foot high screen that displayed the 14-minute film A-Round New York.   Six Mitchell Mark II cameras with anamorphic lenses provided viewers an encompassing 360° introduction to the State of New York. Works of pop art by noted artists would grace the exterior walls of the Theaterama.  It is here where Andy Warhol’s controversial 13 Most Wanted Men briefly appeared prior to their removal at the request of Governor Nelson Rockefeller and objection of fair organizer Robert Moses.

Following the close of the Fair in October 1965, Flushing Meadows-Corona Park underwent a redevelopment from its configuration as the site for the Fair to one of New York City’s largest urban oases.  Several structures from the Fair would remain in hope of future reuse, among them the New York State Pavilion, Federal Pavilion, New York City Pavilion, Hall of Science, Port Authority Heliport, Singer Bowl, and Unisphere.  The New York City Pavilion would become the Queens Center for Art & Culture (Queens Museum today) and the Hall of Science continue as a science center (New York Hall of Science today), but what can become of a structure that is not fully enclosed and would expose patrons to New York winters? For several years the Texaco New York State map terrazzo floor served as a roller skating rink.  However, with the colorful fiberglass Tent of Tomorrow roofing panels falling onto the immediate environs, that led to the financially strapped City of New York removing the panels rather than repair or replace.  With the terrazzo floor now open to the elements and failing to attract a permanent tenant, the New York State Pavilion fell victim to extensive vandalism and would be abandoned in place.

Weather and vandals continued to degrade the Pavilion to such a degree that those who were not alive during the Fair would wonder what that rusting relic alongside the Grand Central Parkway was.  For many years it would be grassroots efforts, such as the New York State Pavilion Paint Project, that would watch over the decaying pavilion.  As the 50th Anniversary of the 1964/65 New York World’s Fair approached, renewed interest in the Fair and the Pavilion increased.  Local middle school teacher Matthew Silva began production on a documentary of the structure in 2013, Modern Ruin: A World’s Fair Pavilion.   Silva, Salmaan Khan, and Christian Doran founded People for the Pavilion to raise public awareness of the Pavilion and assist in preservation or its modification to a second life.   During the 50th Anniversary of the Fair, visitors were able to once again explore the ground floor of the Tent of Tomorrow on a limited basis and the events proved to be exceptionally popular.  In 2015, members of the International Union of Painters and Allied Trades Union donated labor, paint, and supplies to return the Tent of Tomorrow’s crown to its former brilliant yellow. Funding for structural repairs and lighting have been allocated by the Borough of Queens and the Mayor’s Office.

Try clicking the ‘Scanning’ tab above to experience our Laser Scan of the Pavilion!

With discussion of potential modifications, the ChronoPoints team and CyArk ventured to Flushing Meadows-Corona Park to document the New York State Pavilion in 2014. The building was lidar scanned with Faro Focus3D S120 and Leica ScanStation C10 terrestrial laser scanners. ChronoPoints would especially like to thank Langan Engineering, the New York City Department of Parks & Recreation, CyArk, and FARO.

Thank you to CyArk and the OpenHeritage3D partner for displaying this point cloud.

A few tools that will enable you to enhance the point cloud based on your computer’s performance.  Click the hamburger icon at the top left of the point cloud. Then everyone should increase the POINT BUDGET all the way to the right.  If you are on a computer with good graphics, select HIGH QUALITY for the splat quality. You can rotate the point cloud with your mouse.