Posted at 09:51h in Laser Scanning by Admin
Share 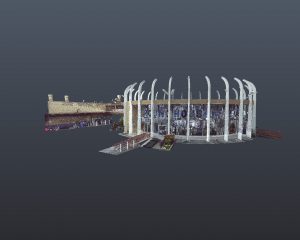 The ChronoPoints team ventured to La Mesa in March to capture the Penske-Ford Roundhouse prior to its impending demolition. We just learned the demolition of the building is now underway. We are currently working on a detailed Project Page regarding the structure’s history and our laser scanning effort.  Until we launch the Roundhouse Project Page, here is a sample laser scan image of the building.

If you have historic images of the Roundhouse or of the demolition, we would greatly appreciate if you would consider sharing them with the project so they can be archived and shared with future generations.